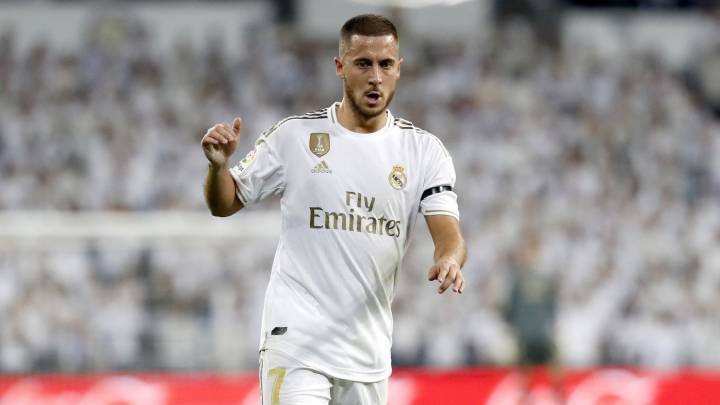 Having found a successful formula for his Real Madrid side in Eden Hazard's absence, Zinedine Zidane must now fit the Belgian back in.

82 days after being sidelined by an ankle injury, Real Madrid's marquee summer signing, Eden Hazard, is expected to return to action in Sunday's LaLiga clash with Celta Vigo (21:00 CET) - and the Belgian's comeback leaves head coach Zinedine Zidane with the question of how best to fit him back into his side.

In the time since Hazard limped out of November's Champions League draw with Paris Saint-Germain, Madrid have played 16 games and lost just the once, to Real Sociedad in the Copa del Rey. In the forward's absence, indeed, Zidane has found a winning formula for his new Madrid side, a way of playing that has led Los Blancos to the top of LaLiga and sees them go into their Champions League last-16 tie with Manchester City full of confidence.

Against that backdrop, Hazard's return presents Zidane with something of a tactical conundrum.

How Zidane might fit Hazard back into his team:

Zidane spent much of the early stages of the season seeking out a system that would get the best out of Hazard, a 100-million-euro signing earmarked as the leader of the post-Cristiano Ronaldo era at Real Madrid. And, it's fair to say, the Frenchman didn't find this a straightforward task. In Madrid's last two pre-season clashes, against RB Salzburg and Roma, he even experimented with a system featuring a three-man defence.

Above and beyond the team's formation, however, what became apparent was that Hazard became a far greater attacking influence when relieved of defensive duties and positioned closer to centre-forward Karim Benzema. This in turn forced Zidane to add steel further back by having Casemiro and Fede Valverde anchor the midfield together.

When it comes to raw figures, the impact of having Hazard in the team is clear. With the 29-year-old, Madrid have averaged more goals per game (2.14) than without him (2). On the other hand, they are a side who concede more when Hazard plays (0.78 per match) than when he doesn't (0.68). During his injury absence, Madrid have kept seven clean sheets out of 16.

Before Hazard's ankle injury, Zidane had come to the conclusion that the former Chelsea man was best off partnering Benzema up front in a 4-4-2, fielding the Belgium international in such a role in his last two games - and seeing him have a particularly impressive impact against PSG until he was forced off.

In terms of the players whose place in the team is most threatened by Hazard's return, there are several who are likely to be affected: Isco, who has started four of the last five LaLiga games; Luka Modric (it is probably a straight fight between the Croat and the Spaniard if Hazard is in the XI); and Rodrygo Goes and Vinicius Júnior, who may find themselves taking more of a back seat.

Zidane certainly has questions to mull over as he prepares to welcome Hazard back into the fray.