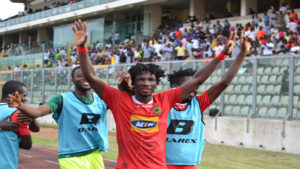 Special aide to Chief Executive Officer of Asante Kotoko, Dr. Kwame Kyei has disclosed that Simba SC have enquired about the availability of two of their players in the wake of their friendly clash against the Tanzanian side on Wednesday.

Asante Kotoko were invited for an international friendly match by the Tanzanian giants as part of their annual Simba Day celebration.

The Porcupine Warriors held the hosts to a 1-1 stalemate at the Uhuru Stadium in Dar es Salaam.

Striker Obed Owusu shot the Porcupine Warriors in front on the stroke of half time after tapping in a rebound from Michael Donkor's shot before Emmanuel Okwi equalised for the hosts on 77th minute.

Goalkeeper Felix Annan saved a crucial penalty by the 84th minute to save Kotoko from losing the game.

"They told us we are going to hear from them very soon on one of these players .Other officials from Morocco and Cote D'ivoire who were present also enquired about Sogne Yacouba especially."

"We won't be in a haste to do anything but will wait till we get an official bid from them and we take a decision."

"Am only an assistant to the Executive Chairman and so will report to him all that has happened."