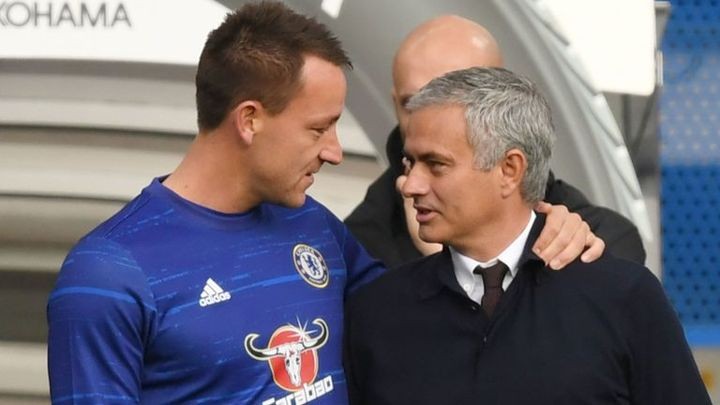 Aston Villa boss Dean Smith is hoping with John Terry in his corner he can "plot the downfall" of the former England defender's old Chelsea manager Jose Mourinho.

During his 19-year playing career with the Blues, Terry worked under Mourinho for almost six of those, winning three Premier League titles, the FA Cup and three League Cups together.

Now working as one of Smith's assistants, alongside Richard O'Kelly, Terry and Mourinho will cross swords for the first time in opposing dugouts when Spurs head to Villa Park live on Super Sunday.

Asked if he would be picking Terry's brain ahead of the game, Smith replied: "I have been picking JT's brains for the last 18 months!

"Hopefully the combined brains of myself, JT and Richard can overcome Jose.

"JT's been his captain twice at Chelsea and they've won a lot of trophies together. They've got a deep respect for each other.

"JT's openly spoken about the admiration he has for Jose as a coach and a person when they were at Chelsea.

"But the dynamics are different now. He's on my bench and he's sat behind me giving me bits of information that I'll need. We'll try and plot the downfall of one of his ex-coaches."

Offering an insight into Terry's role during matches, Smith added: "He is wired up to the analysts upstairs. We have a bird's eye view, as well as his own eyes.

"I always say you get a feel in the game and my feel might be different to that of Richard or JT at times. I like to know what they are thinking.

"It gives me an opportunity to run things through my head and process the information before we make decisions."

During his near five-year stint in his first managerial post with Walsall, Smith was affectionately known as 'the ginger Mourinho' due to his tactical acumen, planning and being able to get the best out of players.

While jokingly conceding he is "not so ginger now", Smith is proud of the moniker and the legacy he feels he has left behind at the clubs he has been involved with.

"Every club I've been at, Leyton Orient, Walsall, Brentford that have been part of my journey and coaching experience, I've learnt an awful lot from all of them," said Smith.

"It's not just tactical. There are a lot of man-management skills that go into it because every player's different. They all need a different message at times to get the best out of them.