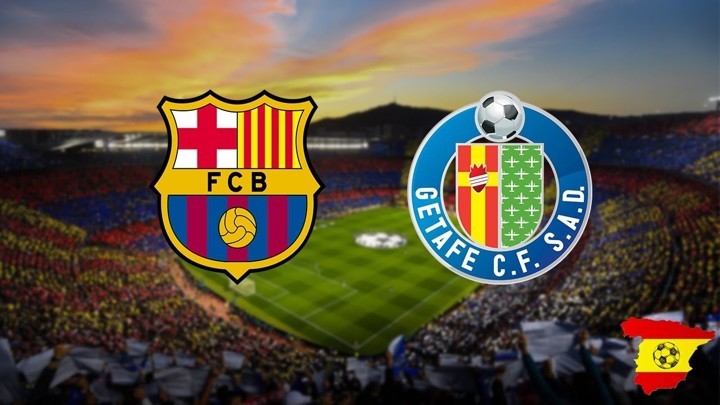 Barcelona will continue their pursuit of La Liga leaders Real Madrid when they welcome high-flying Getafe to Camp Nou on Saturday afternoon.

The Catalan giants will be looking for their third straight league victory, but an in-form Getafe have won each of their last four in Spain's top flight to rise into third position in the table.

There is no getting away from the fact that it has been a difficult few weeks for the Catalan giants, who have lost Ousmane Dembele for the remainder of the season due to yet another hamstring problem.

Talk of unrest in the camp involving sporting director Eric Abidal and senior players has not helped Barca's current situation, but there is still plenty for the supporters to be positive about heading into the business end of the season.

Indeed, the gap to La Liga leaders Real Madrid is just three points, having won their last two against Levante and Real Betis. Lionel Messi provided a hat-trick of assists in the 3-2 success over Betis, and it is vital that the Catalan giants stay in touch with their Clasico rivals at this stage of the campaign.

At the time of writing, the club have still not made an emergency signing to replace Dembele, but a number of names are thought to be in the frame.

The Champions League will resume later this month, meanwhile, and Barca will be determined to pick up a positive result from the first leg of their last-16 clash against Napoli on February 25.

Getafe, though, are sure to provide tough opposition for the champions this weekend. The Madrid club will head into the match off the back of four straight league wins over Leganes, Betis, Athletic Bilbao and Valencia, not conceding a single goal in the process.

Jose Bordalas's side actually finished fifth in La Liga last season and qualified from their Europa League group to make the last-32 stage of the competition, where they will meet Ajax.

The capital outfit have impressed again in the league, meanwhile, and currently sit third in the table, three points clear of fourth-placed Atletico Madrid.

Getafe would actually move to within four points of second-placed Barca should they manage to pick up all three points this weekend, although they have not beaten the Catalan giants in the league since November 2011, which is an indication of the size of their task on Saturday afternoon.

Barca will again be unable to call upon injured forwards Dembele and Luis Suarez, while central defender Clement Lenglet is suspended following his red card against Betis last weekend.

Gerard Pique is back from a ban of his own, though, and will return to the starting XI.

It remains to be seen whether Samuel Umtiti and Nelson Semedo will both be available, however, as the former missed training on Wednesday due to a knock while the latter was absent through illness.

Ansu Fati and Jordi Alba were both named on the bench against Betis but should return, while Arthur is pushing for a spot in the middle of the park.

As for Getafe, experienced defender Damian Suarez will miss out through suspension, but Bordalas otherwise has a strong squad available to choose from this weekend.

Angel continues to be linked with a move to Barca, but the number nine could again be on the bench this weekend with Jorge Molina set to continue alongside Jaime Mata in attack.

Kenedy is another option for change, although Allan Nyom's defensive capabilities could see the 31-year-old again feature in a wide position, while Marc Cucurella should line up against his parent club.

This is a very, very tight match to call for obvious reasons. Getafe will arrive full of confidence, but Barca's home form this season has been excellent, and we expect Quique Setien's side to triumph on Saturday.