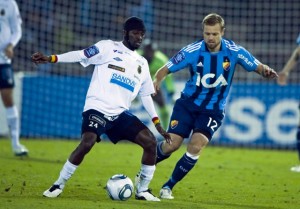 Ghana midfielder Yussif Chibsah has completed a bumper move to Swedish giants Djurgarden after excelling in the country, GHANAsoccernet.com can exlcusively reveal.

The former Ghana U23 captain sealed the move on Tuesday night following his exploits with Gefle this season.

The 27-year-old, who led Ghana at the Athens Olympics, signed a three-year contract.

Chibsah is regarded as one of the best midfielders in Sweden having excelled with Gefle where he was the club's top player.

The former Kotoko player is delighted to have completed his move insisting he will help the giants win laurels next season.

"Making the move to Djurgarden is an important step in my career. The club is very famous and for its history and achievements," Chibsah told GHANAsoccernet.com.

"Now I will join my new team-mates so we can fight for laurels and I will make the supporters realise why the management decided to sign me.

"I will fight on the pitch and cover every blade of grass in order to achieve our objecitve of winnig titles in Sweden and in Europe."

Chibsah has 15 Black Stars caps and was captain of Ghana's Olympic team in Athens in 2004.

He left Asante Kotoko to play for Israeli Hapoel Nazareth before he was captured by Gefle in 2007.

Chibsah is highly respected in Ghana for his educational achievements and was once named among the best farmers in the country.