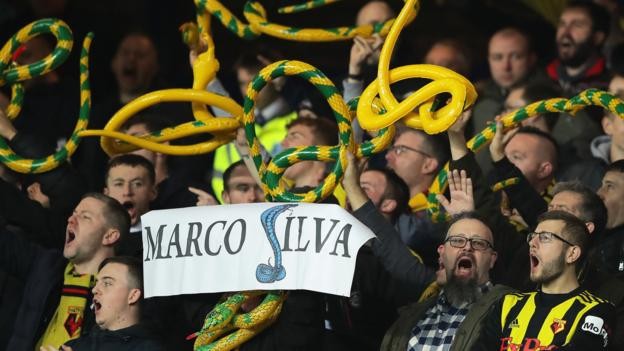 The man at the centre of it all - Marco Silva, formerly of Watford and now Everton boss

Everton and Watford may not be one of the traditional great Premier League rivalries - but the clubs meet at Goodison Park on Saturday for a fixture that has had inflatable snakes, threats of legal action and even Kelly Clarkson played in anger as its recent backdrop.

So how did two clubs with a reputation for friendliness and a desire to embed themselves in their local community suddenly become awash with acrimony?

How did it all start?

The bad blood started flowing in November 2017 when Everton made Watford manager Marco Silva their prime target after sacking Ronald Koeman only nine games into his second season as they lay in 18th place.

Everton were impressed by Silva's early work at Watford, making their first approach after he had only taken charge of 11 league games. The Hornets were in no mood to clear the Portuguese's path to Goodison Park, despite him rejecting opportunities to dampen the speculation and with owner Farhad Moshiri prepared to spend £10m to get his man.

Watford held firm but the signs that the saga would soon turn sour for both clubs and Silva had been posted - and so it proved.

Silva's Watford record before and after Everton approach

Silva denied his head was turned by Everton's approach but his protests were not helped by a sudden decline in Watford's form and results which saw him sacked in January. The finger of blame was firmly pointed in the direction of Goodison Park.

He was out after one win in 11 Premier League games, after losing only one of his first eight. The inference that Watford felt his eye had been taken off the ball by Everton's attentions was clear.

In a statement condemning "an unwarranted approach from a Premier League rival", Watford underscored "a deterioration in focus and results".

Watford then made a formal complaint to the Premier League alleging Everton had approached Silva illegally. Moshiri, denied his main target, was eventually forced into the emergency, not to mention highly expensive, appointment of Sam Allardyce on an 18-month contract as Everton's season threatened to descend into chaos.

Watford statement on the sacking of Marco Silva (21/01/2018) "This has been a difficult decision and one not taken lightly. The club is convinced the appointment of Silva was the right one and had it not been for the unwarranted approach by a Premier League rival for his services we would have continued to prosper under his leadership."The catalyst for this decision is that unwarranted approach, something which the board believes has seen a significant deterioration in both focus and results to the point where the long-term future of Watford FC has been jeopardised."For the security and success of the football club, the board believes it has to make a change."

Snakes, songs and another sacking

Watford stabilised under new manager Javi Gracia to finish 14th in 2017/18. Allardyce, meanwhile, guided Everton to eighth but his six-month reign was underpinned by rising discontent from supporters at his sterile approach.

It was loveless relationship, ended with a reported £6m pay-off for the former England manager, and an episode now viewed by Everton fans as the football equivalent of having to briefly take some particularly toxic medicine to eventually feel only slightly better.

This is where Silva, finally, came in - and the ill-feeling bubbled to the surface once more.

The Premier League had been attempting to mediate in the case between the two clubs but a meeting in April 2018 failed to resolve the matter and when Silva was officially appointed at Everton at the end of the following month, Watford felt this confirmed their worst suspicions.

It did not stop the two clubs doing business when Brazil striker Richarlison left Watford to join Everton in the following July for a fee worth up to £50m - but suggestions the deal included a compensation package to settle the Silva dispute were soon dismissed.

It led to two acrimonious occasions, with some pantomime villainy from those in charge of Watford's record collection, when the two clubs met last season.

When Silva faced his old club for the first time at Goodison Park in December last year, a game which ended in a 2-2 draw, the travelling fans brandished plastic snakes and directed fierce verbal abuse in his direction.

The return at Vicarage Road in February was prefaced by Watford captain Troy Deeney, admittedly playing to the gallery at a fans' forum, saying they would "kick the s***" out of Everton. The comments were publicly noted by Silva.

Silva endured a miserable, hostile return. Not only were the snakes on show once more but Watford's choice of pre-match music raised some eyebrows at Everton, with those on the decks including Al Wilson's 1968 hit "The Snake", "Since U Been Gone" by Kelly Clarkson and "Go Your Own Way" by Fleetwood Mac.

Watford's 1-0 win was greeted with relish and they went on to prove how much they had moved on from Silva by reaching their first FA Cup Final since 1984, although it ended in a 6-0 humiliation at the hands of Manchester City.

Silva, meanwhile, oversaw some impressive performances towards the end of the season. Everton finished eighth but with none of the sourness that accompanied Allardyce's similar feat as Chelsea, Arsenal and Manchester United were all beaten by an increasingly attractive side that had Richarlison as its focal point.

Richarlison scored 13 goals for Everton last season, including one in a 2-2 draw with former club WatfordHappy ever after?

Everton finally resolved their dispute with Watford, thus avoiding the possibility of a full, independent QC-led inquiry being launched by the Premier League, by paying £4m in compensation in February.

And word is it will all be "very civilised" in the boardroom at Goodison Park on Saturday, although the two clubs did cross swords once more in the closing days of the transfer window as Watford rejected an Everton offer in excess of £30m for midfielder Abdoulaye Doucoure.

Watford's refusal to do business was not based on any leftovers from the Silva affair. It was a decision based on the fact the Hornets see Everton as a direct rival, value Doucoure at a much higher price and would have struggled to find an adequate replacement.

The main event for Gracia and Silva

With peace seemingly restored, the main business for Silva and his opposite number Gracia will be on ensuring Everton and Watford maintain progress this season.

Silva will want, some may even suggest need, a fast start after more heavy investment in the transfer market this summer which saw Everton bring in Moise Kean, Alex Iwobi, Fabian Delph, Jean-Philippe Gbamin and secure Andre Gomes on a permanent basis.

Everton got a creditable draw at Crystal Palace on the opening day but expectations are high. Silva will need to be in the running for the European places and produce a cup run this season.

Gracia, meanwhile, will want points on the board after the dismal 3-0 loss at home to Brighton and he will be looking club-record signing Ismaila Sarr, an arrival from Rennes for a fee in excess of £20m, and Danny Welbeck to add potency.

The feud may be over - but both managers know they must win their own battles this season.