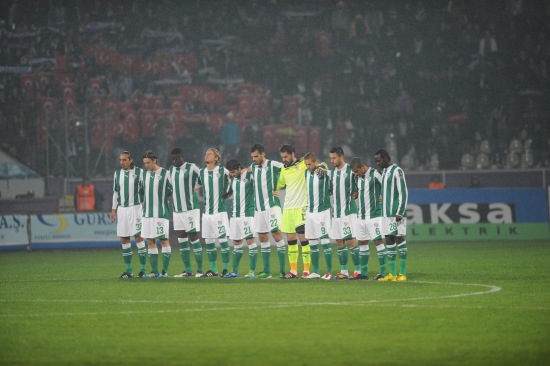 Ghana striker Prince Tagoe slammed his first goal in his first start for Turkish club Bursaspor when they drew 1-1 with second-placed Orduspor on Wednesday.

The Black Stars attacker reminded fans of his predatory instinct when he scored in the away league game.

A beautiful header from the Ghanaian player put his side in thew lead until the home side drew level on the stroke of full time.

Tagoe headed home the opener just before half-time but his goal was cancelled out late in the game.

He was substituted after the hour mark to boost the defence of the club but they could not stop the high flying Orduspor from getting the late goal.

Prior to Wednesday night's game, the former Partizan Belgrade strikerâ€™s previous appearances for Bursaspor have all come as a substitute in six league matches.

Tagoe joined Bursaspor at the start of the season from Hoffenheim after spending a highly successful loan spell with Partizan where he won the league and Cup double.

With his performance, Tagoe is now expected to get his first start in the league in the next game as he moves closer to his mission of settling in at the club by the end of the year.

Bursaspor are in mid-table with a third of the season gone in the League.

There was a minute silence for those killed in the Â recent earthquake in Turkey before the start of the game.

Watch video of Tagoe's goal below: