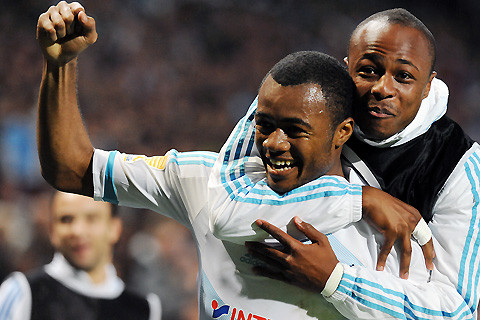 Udinese surrendered the leadership of the Serie A after after slipping to their first defeat of the season at Napoli.

Kwadwo Asamoah played 64 minutes for Udinese while his in-form compatriotÂ Emmanuel Agyemang-Badu played the entire duration of the game as they lost 2-0 to Napoli.

AC Milan underlined their impressive form with a 4-1 hammering of visiting Parma at the San Siro.

Ghana's Kevin-Prince Boateng was influential in midfield for Milan.

Inter Milan are just a point above the relegation zone after they were held to a 1-1 draw at Atalanta.

Sulley Muntari could not find his way into the Inter 18-man squad for the trip.

In the reserves league, former Ghana Under-20 defender Bright Addae headed home the winner for Parma who beat Siena 2-1. Godfred Adolf sat out due to injury.

Emmanuel Frimpong played 76 minutes of Arsenal's 2-1 victory over Bolton Wanderers in the League Cup on Tuesday.

Birmingham City made it four wins out of four and stretched their unbeaten run to six games with a 1-0 win over Leeds United at the St Andrew's Stadium.

Schalke 04 recorded a 2-0 win over Karlsruhe at their own backyard with veteran defender Hans Adu-Sarpei on the bench.

Hibernian threw away a 4th minute lead to lose 4-1 to giants Celtic at the Easter Road Stadium.

Real Madrid reclaimed second spot in the Primera Division after beating Villarreal 3-0 at the Santiago Bernarbao.

Midfielder Jeffery Sarpong was out of the Sociedad first team.

Ghanaian youngster Richard Boateng failed to make it to the Granada final 18-man squad for the game.

On Tuesday in the French Cup, Jordan Ayew scored the second goal for Olympique Marseille who defeated Lens 4-0.

Andre Ayew watched the action from the bench.

Defender Jerry Vandam was a pillar in defence for Caen who defeated Auxerre 2-1 to advance to the next stage of the competition.

Ghana captain John Mensah was left out of the Olympique Lyon 18-man squad that won 2-1 at St Etienne to remain in the competition.

John Boye is out with injury.

Winger Ishmael Yartey set up the second and fourth goals for FC Servette in their 4-1 triumph over ten-man Grasshoppers at their own backyard.

Striker Prince Tagoe scored his debut goal for Bursaspor in the Turkish Super Liga since joining them from TSG Hoffenheim in August in a 1-1 draw at second-placed Orduspor.

He headed home the opener in the nick of half time.

Midfielder Desmond Agyeman was booked on the 46th minute and lasted the entire match for Jaro who held Honka to a 1-1 draw.

Alhassan Wakaso played the full 90 minutes for Portimonense who pipped Feirense 1-0 in the Portuguese League cup.

FC Dnipro lost 3-2 to Volyn Lutsk in the Ukrainian Cup.