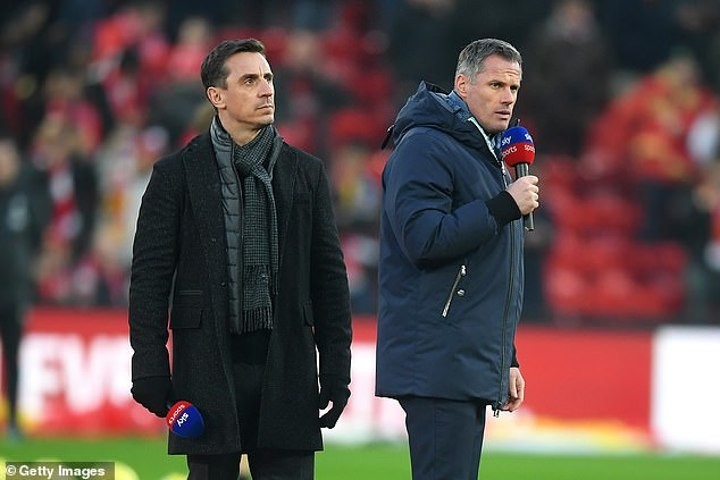 Gary Neville has blasted Manchester United's owners for sticking with Ed Woodward despite his 'unforgivable' record in the transfer market.

Speaking on Sky Sports' The Gary Neville podcast, the ex-England right back was left flabbergasted by the lack of quality in United's squad despite huge spending on players and wages since Sir Alex Ferguson departed in 2013.

Neville took aim at United's owners, the Glazer family, for persisting with Woodward, who has been heavily criticised by fans for his recruitment failures.

'I can't believe the investment that's been put into the squad in the last five, six, seven years and you end up with that out on the pitch,' he said.

'I saw a statistic two weeks ago that United have the second-highest wage bill in the world. And that's the squad they've got. It's unforgivable. It really is.

'I can't change the ownership of Manchester United, no one can. But I'm struggling to understand why the ownership have persisted in trusting that management team to oversee the building of a Premier League title winning team since Sir Alex Ferguson left because if you don't lose your job for essentially overseeing that investment, that wage bill, and putting that team out on the pitch then I have to say something is really wrong.'

Neville did give Woodward and his team credit for their commercial nous, with United continuing to rake in millions from lucrative commercial deals with the likes of adidas, Chevrolet and Aon.

But the 44-year-old remains adamant that Woodward is not the right man to bring back the glory days on the pitch and that the Glazers must bring in 'best in class football operators' if they are to return to the top of the game.

Neville added: 'There's real talent in that executive team, they can create revenue, they can do things with in the football club that can help to be fair, but in terms of what the club needed to do for a number of years now is put the best in class football operators into that club and they're not doing it. They're not doing it and it's a mess.

'They need to sort it out and quickly. The thing that should shock the owners more than anything, they should see that last minute goal – they should have that playing on record every single day in their office over in America – Liverpool Football Club's fans singing we shall not be moved.'