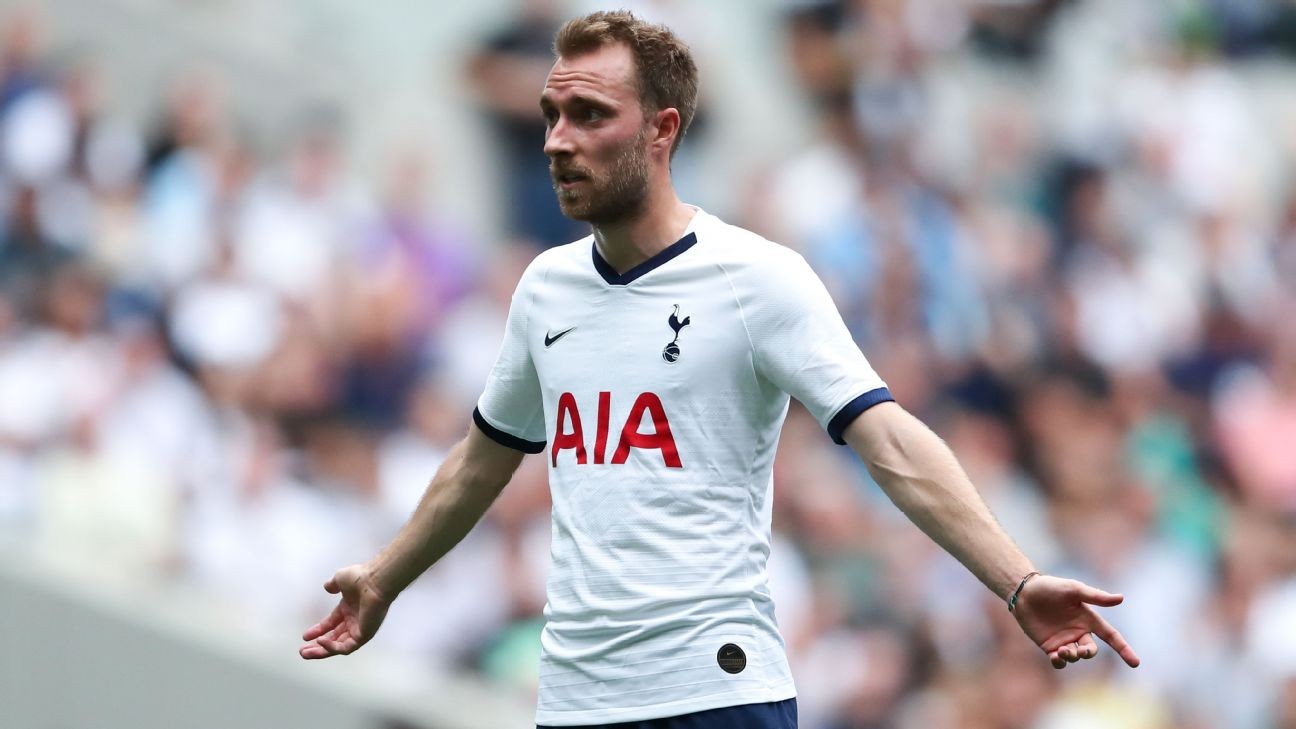 The Premier League is back and this weekend has plenty of talking points. Nick Miller runs us through some of the biggest storylines.

In the end a 3-1 victory over Aston Villa last Saturday was perfectly satisfactory for Tottenham, on the face of things: three points, their big new signing Tanguy Ndombele excelled and Harry Kane notched up a pair of goals. Job well done, congratulations lads.

But there were things to concern Spurs fans, most specifically the curious omission of the apparently un-injured Jan Vertonghen from not just the starting XI but the match day squad, and the absence of Christian Eriksen. For the 64 minutes that the Dane remained on the bench against Villa, Spurs looked ponderous, occasionally devoid of ideas about how to unlock a stout defence, even leaden. As soon as he came on, that all changed and they scored three goals.

- ESPN Luck Index: Man City should have won the league by a bigger margin

In the short-term the situation is rectified easily enough -- he will surely start in this weekend's big game against Manchester City -- but looking further down the line it might be concerning that Spurs are seemingly so reliant for creativity on a player who, unless something significant changes in the coming months, won't be around this time next year.

Of course, Giovani Lo Celso could turn out to be brilliant and Ndombele could pick up some of the slack and Dele Alli isn't fit yet and so on and so forth, but it's a little uncomfortable for Spurs that they apparently need Eriksen so much.

Who will play for Manchester City?

Pep Guardiola has a slightly different problem to Mauricio Pochettino. After their frankly fairly tedious, routine evisceration of West Ham last weekend, Pep Guardiola essentially admitted that he had picked Riyad Mahrez and Gabriel Jesus for that game to ensure that Bernardo Silva and Sergio Aguero don't get complacent. It was almost a pleasing bonus that both men played superbly, Mahrez in particular instrumental in most good things City did.

So the question for Guardiola is: who will he select for a rather stiffer task than the Hammers on a Saturday lunchtime? Will he go for the tried and trusted Aguero and Silva, or the hungrier duo of Mahrez and Jesus? To a point, it doesn't really matter that much, as City's options are now of such high quality that it barely makes any difference who the individual bricks in the wall are, it only matters that they perform. And, going on the basis of last weekend (not forgetting Kevin De Bruyne, looking back to his best after last year's injury issues), everyone is performing to an incredibly high standard.

It was barely a couple of weeks ago that Adrian didn't have a club, released after spending a season on West Ham's bench. He was training with Union Deportiva Pilas, a team from the outskirts of his hometown Seville, who play in the Spanish sixth tier. Then Simon Mignolet went to Club Brugge, Liverpool needed a goalkeeper quickly, Alisson did something nasty to his calf and suddenly Adrian is saving the winning penalty in the European Super Cup.

These are the odd, hazy days in a story like this, where strange things are possible, but soon enough Adrian will be deep in the weeds, and he'll have to deal with the more prosaic business of keeping goal for Liverpool over the next few weeks. He'll be doing that at Southampton this weekend, where his new team were given an awful fright last season as they chased the title, and when the slightly surreal afterglow of Istanbul fades, it will be interesting to see how Adrian fits in with Liverpool's defence for a longer period of time.

Chelsea must turn good performances into a result

The broad consensus has been that Frank Lampard's Chelsea have played well in both of their games so far this season, even if they won neither and lost the first handsomely. Little bits of luck in both the Premier League opener against Manchester United and the Super Cup loss against Liverpool would have made the difference to both results, and Lampard would be striding into this weekend's game against Leicester with a big smile on his face.

He probably doesn't need to worry too much. Chelsea have arguably performed above expectations so far, which seems odd given they lost one game 4-0 and threw away a lead in the other before going down on penalties, but given the broader circumstances, with an already inexperienced squad impacted by injuries, Lampard will probably be quite pleased.

However, being pleased is all very well, but they do need to turn that into something tangible. If they don't beat Leicester it probably won't mean much in the general context of the season, but a win would serve as some sort of affirmation that they are doing something right, and thus give them something off which to propel into the rest of the season.

Will the promoted trio continue to be positive?

It's a similar story with the three promoted clubs, after appearing in their first games back in the big boys' league. Sheffield United grabbed a good point at Bournemouth, Aston Villa had Tottenham sweating and while Norwich's defence was weak against Liverpool, the way they attacked at Anfield was at least encouraging for the season ahead.

Which is great, and congratulations to them all, but now all three have games at home against teams that should not, to say the least, put the fear of god into them. Sheffield United have Crystal Palace, Villa host Bournemouth and Norwich welcome Newcastle.

If there was one theme that ran through the three newbies' opening day performances then it was positivity: to different extents, all three played their own games with conviction, and weren't cowed by the prospect of facing established top flight teams. That will hopefully give them confidence that their approaches can work in the Premier League, and that they will continue in this vein.