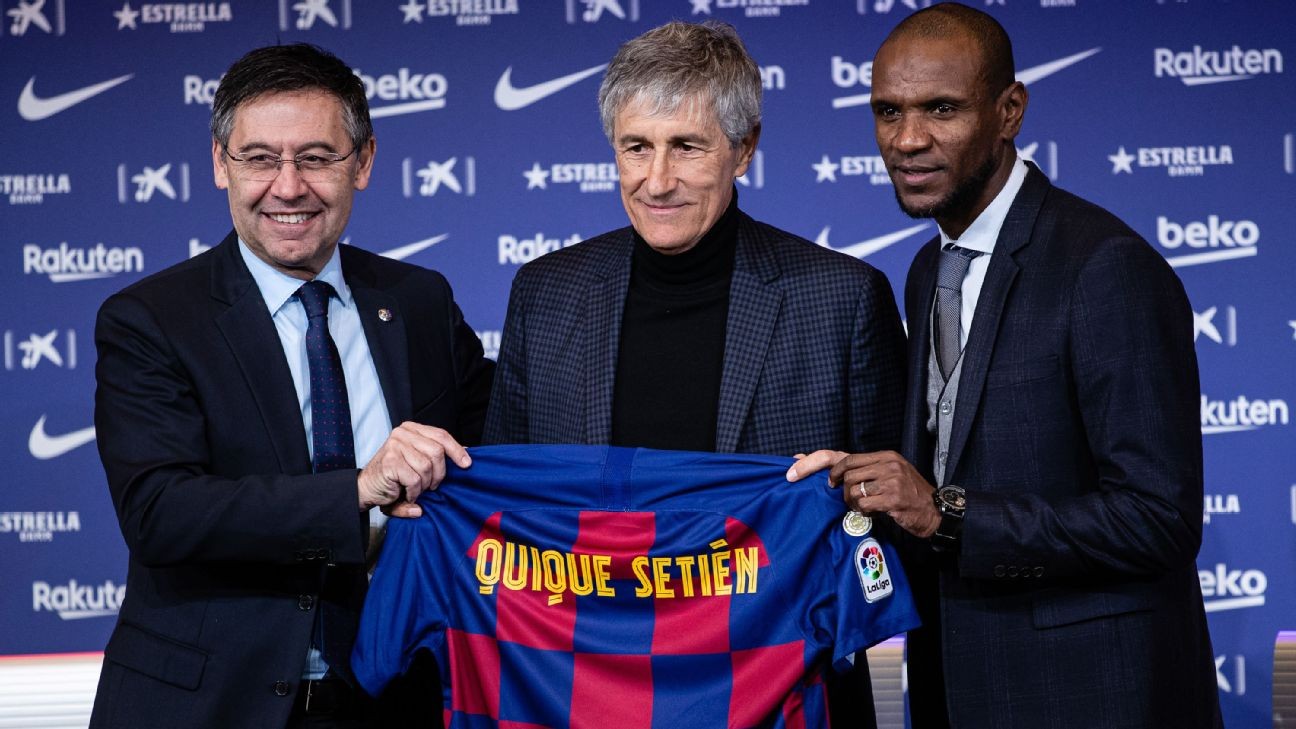 Sid Lowe says Quique Setien will be embraced by Barcelona purists because of his style of play.

Steve Nicol doesn't understand why Ernesto Valverde was sacked with Barcelona atop the La Liga table.

BARCELONA -- Quique Setien has said he is struggling to comprehend being handed the top job at Barcelona after spending Monday with the cows in his home village in the north of Spain.

Setien, who's been out of work since leaving Real Betis last summer, has replaced the fired Ernesto Valverde as Barca coach on a contract until 2022. He took training for the first time on Tuesday and will be in the dugout for Sunday's league game against Granada at Camp Nou.

- ESPN La Liga fantasy: Sign up now!
- When does the transfer window reopen?

"Not in my wildest dreams could I have imagined being here," Setien said in an introductory news conference. "It's all happened so quickly. Just yesterday, I was walking along beside the cows in my village; now I'm here training the best players in the world."

Setien, 61, has not taken the usual route to the top. In a nomadic career, he has coached Lugo, Las Palmas and Betis, among others. He has never won a trophy and his highest ever La Liga finish was sixth with Betis in the 2017-18 season.

However, he has won acclaim for the manner in which his sides have played football, which is why Barca turned to him.

"Honestly, I just could not imagine them going for me," he added. "I don't have an extensive CV, I've not won any trophies. The only thing I have, which I have demonstrated for many years, is this philosophy of football which I love.

"I have used that same philosophy wherever I have been, Look at my sides at Las Palmas and Betis, they played good football. Whenever I go to a new club, I only guarantee one thing: that they will play good football. I didn't know if that would be sufficient to convince such a big club to give me an opportunity, but I am extremely grateful."

Valverde, who won back-to-back league titles during his time in Catalonia, leaves with Barca top of La Liga and safely through to the round of 16 of the Champions League, where they will face Napoli.

"That's not normal," Setien said. "In my situation, you imagine you will receive an offer from a team in problems and low in the table. I am very grateful for the work done by Valverde."

The dismissal of Valverde and the appointment of his successor has been criticised for the way it has played out in public. Barca's open pursuit of Xavi Hernandez -- who turned the job down over the weekend -- hung Valverde out to dry before he was eventually replaced by Setien on Monday.

Barca president Josep Maria Bartomeu defended the club's decision to change coach midway through a season for the first time since 2003, when Louis van Gaal was sacked, but admitted things could have been handled better.

"We have known for a while that the team's dynamic and performances could be improved, even though results have been very good," Bartomeu said. "Obviously. I would have liked things to happen differently, though.

"During recent weeks we have spoke with different managers, including Setien. We'd spoken with Valverde many times, too. We are halfway through the season and we felt we needed a boost for what remains of the campaign. And, with that, we want to win La Liga, the Champions League and the Copa del Rey."