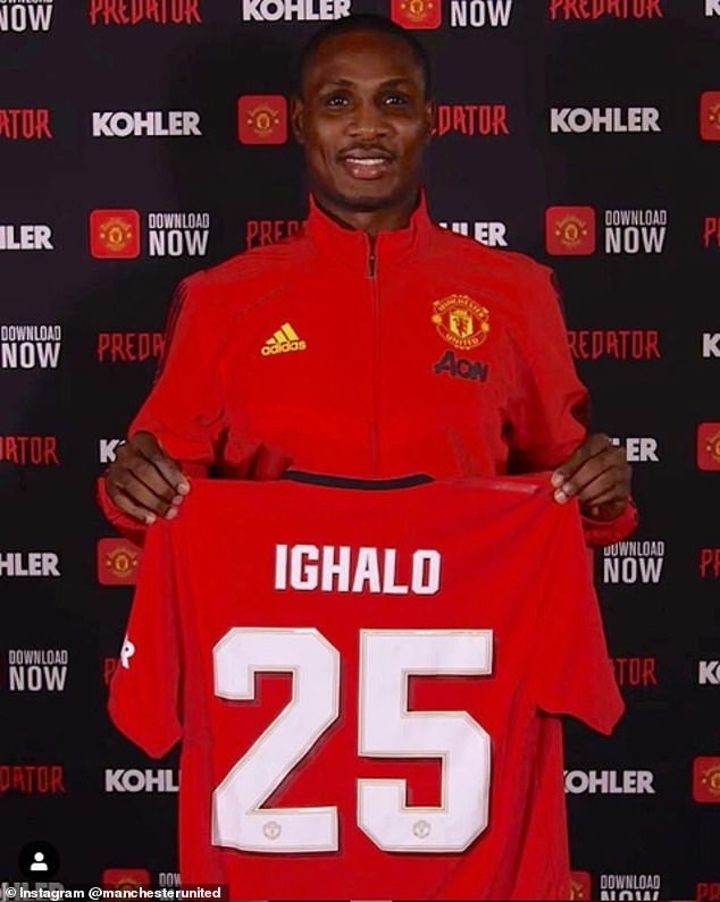 Millions of people in the football-mad nation of Nigeria will be gathered around their television sets on Monday night when Odion Ighalo is expected to make his debut for Manchester United.

The 30-year-old striker, who has joined the Old Trafford club on loan from Shanghai Shenhua until the end of the season, is set to feature against Chelsea at Stamford Bridge.

There were street parties in Ighalo's home town when the news broke that he'd signed for United, a club that enjoys widespread support in the African country.

Surprisingly, Ighalo will be the first Nigerian to wear United's colours, but many of their players have graced other teams in the Premier League.

We count down a top 10 of the best Nigerian players to feature in England's top-flight.

We begin in the present with one of the most consistently impressive performers in the Premier League at the moment.

Ndidi had to suffer constant comparisons with the man he replaced in Leicester's midfield, N'Golo Kante, but has well and truly proven he is not just filling the void but is a highly influential player in his own right.

It's no coincidence that Leicester's title challenge against Liverpool started to fade away when the 23-year-old suffered an injury in January.

Ndidi is one of the best in England's top-flight for tackle success, recovering the ball and miles covered, and he's still young enough to improve his game.

Few can compare with Ameobi for longevity at one club after his 14 years, 397 appearances and 79 goals for Newcastle United having come through their academy ranks.

At no point could Ameobi be described as a prolific goalscorer, but it should be remembered that most of the time he came off the bench during games.

But there were highlights, including scoring against Barcelona in the Nou Camp and netting twice against Bayer Leverkusen during a Champions League campaign.

His 50th goal for the club also happened to come against bitter rivals Sunderland in February 2009.

Babayaro was just a teenager but commanded a fee of £2.25million when Chelsea spotted him at Anderlecht in April 1997, an indication of his promise.

Injury meant he missed Chelsea's wins in the League Cup and European Cup Winners' Cup finals of 1998 but the left-back would lift the FA Cup in 2000.

Though he faced competition for his place from Graeme Le Saux during seven years at Stamford Bridge, Babayaro still played over 200 games for the club.

His handful of goals for Chelsea were celebrated with backflips and other acrobatics, which made his a crowd favourite.

After Wayne Bridge took his place, Babayaro moved on to Newcastle United where his career wound down.

A rewind to the 1990s as the Premier League became an increasingly cosmopolitan place with international players from all nations enticed.

Striker Ekoku was born in Manchester but represented Nigeria 20 times between 1994 and 1998.

He played first for Norwich, joining Mike Walker's side from Bournemouth while they were involved in the title race in the 1992-93 campaign, eventually finishing behind champions Manchester United and Aston Villa.

They still made the UEFA Cup and Ekoku scored the club's first goal in European competition and helped them famously beat Bayern Munich before moving to Wimbledon in October 1994.

Wimbledon never scored too many goals but if they did, there was a fair chance Ekoku had scored them as the south London club punched above their weight in the Premier League.

Having impressed in the Championship with Crystal Palace, it was Wigan who pulled Moses up into the Premier League with a £2.5million purchase on the final day of the 2010 January window.

Moses did well for the Latics, who turned down four offers from Chelsea in summer 2012 before accepting the fifth. Soon the winger was a regular as Chelsea won the Europa League in his first season.

As with quite a few players at Chelsea, Moses fell in and out of favour depending on whoever was in charge at the time, going out on loan to Liverpool, Stoke and West Ham over the next three years.

He struggled for opportunities at Liverpool but did better at Stoke. When he returned from West Ham, Moses impressed new manager Antonio Conte and fitted in brilliantly to his 3-4-3 system.

He played and performed well as Chelsea won the Premier League title in Conte's first season but has since dropped out of favour again, spending time on loan at Fenerbahce and then Inter Milan.

Yobo was an absolute stalwart for the Super Eagles, playing 101 times (a national record shared with Vincent Enyeama), and he was a fixture of Everton's defence for years as well.

Initially acquired by the Toffees on loan from Marseille in 2002, he earned a permanent move with a succession of solid performances and remained a first choice pick for David Moyes for the next six or seven years.

Yobo was close to a move to Arsenal in the summer of 2006 but it fell through and he went on to play every minute of the season that followed.

He later went on to captain Everton and made nearly 200 Premier League appearances for the club in total before joining Fenerbahce. He briefly returned to England to make eight loan appearances for Norwich in 2014.

Okocha is probably the Nigerian player that Premier League fans remember with the greatest fondness.

Sam Allardyce wanted to add a touch more glamour to his unfashionable Bolton side in 2002 and Okocha, signed on a free from Paris Saint-Germain, certainly provided it.

Not only did Okocha become popular in Bolton beyond for his skills and trickery, he scored crucial goals to steer Bolton away from the danger of relegation in his first season there.

Handed the captain's armband in 2003, he helped Bolton reach the League Cup final, only to suffer defeat to Middlesbrough.

Okocha played 124 league games for Bolton, regularly appeared on the season's skills showreels and assuring himself of cult hero status in that part of the north-west.

It can be easy to forget 'The Yak's' contribution as he never played for teams at the top end of the Premier League.

But when you consider that Didier Drogba and Emmanuel Adebayor are the only African players to have scored more goals than him in the competition, you get a sense of just how good he was in the penalty box.

Having helped Portsmouth into the top-flight in 2003, Yakubu scored 16 times in 37 matches to ensure Pompey's stay was not a short one.

In all he scored 28 Premier League goals for the south coast club over two seasons before moving to Middlesbrough for £7.5m.

Whilst on Teesside, he helped Boro reach the final of the UEFA Cup in 2006 against all the odds, scoring an important penalty against Roma in the last 16.

That prompted Everton to break their club transfer record to pay £11.25m for him in 2007, taking the No 22 shirt because this was his goals target for the season. He fell one short.

Injury problems affected his later time at Goodison but he added to his Premier League goals tally with Blackburn and scored 95 in 252 appearances overall.

If things had turned out differently, John Obi Mikel would have been the first Nigerian to play for Manchester United back in 2006.

But after his highly controversial transfer from Norwegian club Lyn to Chelsea as an 18-year-old, Mikel gradually settled into a prominent role in their midfield.

It took a little while for Mikel to win the trust of Jose Mourinho and there were some disciplinary issues, but he really seized his chance when Claude Makelele moved to PSG and Michael Essien suffered an injury.

Having won the FA Cup during his first season, the midfielder went on to win two Premier League titles, three FA Cups, the League Cup, Champions League and Europa League during a stellar career with the Blues spanning 372 games.

He was renowned for his strength in the tackle, positional discipline and ball-playing capability, and these attributes also saw Mikel represent Nigeria on 89 occasions.

Arguably the best known Nigerian player of the Premier League era, Kanu won a host of honours during an impressive career.

He'd already won the Champions League with Ajax and the UEFA Cup with Inter Milan before Arsenal signed him for £4.15million in February 1999.

The striker hit the ground running, mainly used by Arsene Wenger as an effective impact sub off the bench.

Perhaps his most memorable moment came during the 1999-2000 season with his memorable hat-trick in 15 minutes against Chelsea that turned a 2-0 deficit into a 3-2 victory.

The signing of Thierry Henry would severely restrict his game time later in his Arsenal career but he still managed to win two Premier League titles and two FA Cups, scoring 44 goals in 197 games.

In 2008, a survey of Arsenal supporters saw Kanu voted No 13 in a countdown of the club's greatest players.

That wasn't the end of his Premier League career, however, as Kanu moved on to West Brom and then spent six seasons with Portsmouth, lifting the FA Cup again in 2008.

Kanu captained the Nigeria team that won gold at the 1996 Olympics and played 87 times for his country in all, scoring 12 goals.