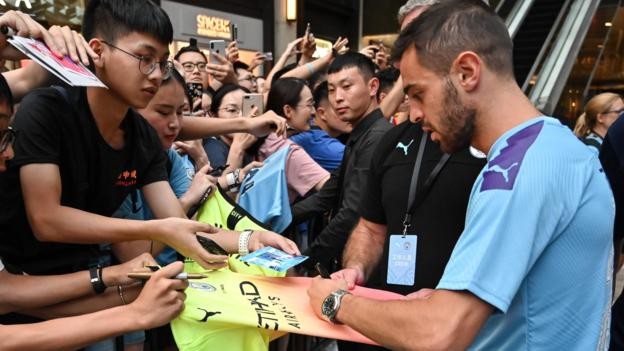 Media playback is not supported on this device

'I first arrived in July and it was so cold!'

Bernardo Silva is a domestic treble winner with Manchester City, but it was not always a smooth path to success for the midfielder, whose senior career began with a sense of rejection at beloved hometown club Benfica.

Listen to the full interview

Silva was born in Lisbon where his love for football saw him join the Benfica academy as a seven-year-old, but it came at a price..

"I'm a Benfica fan but my mum's side support Sporting Lisbon and my dad's family support Benfica. Benfica is the best club in Portugal and I spent 12 years there.

"When I turned seven, my grandfather and my mum paid for me to join Benfica's academy for two months as a birthday present. After those two months, I did not have to pay because I was selected for the next level.

"That was done by my grandfather, who was a Sporting fan. He knew I was a huge Benfica fan and he knew I wanted to play, so I'm very grateful.

"When I was about 15, Rui Costa was playing his last game and I was a ball boy. He plays in my position and he is one of the best midfielders Portugal has known. He was a big inspiration for me as one of my idols.

"I played three senior games and then I had to move to Monaco because Benfica wanted me to go back to the B team. It was difficult to move but I had to do it.

"My dream from seven to 19 was always to play for the first team at Benfica. When I arrived in the first team, I started noticing they did not count on me and I was moved to left-back."

The Portugal international has won back-to-back Premier League titles with City, but says his greatest achievement came in Ligue 1.

"The title race with Liverpool last season was very tough, but in my short career, it was probably my second best achievement because winning the league with Monaco [in 2017] against Paris St-Germain was even bigger. The gap is huge and it only happens every 20 years. Last year was a special Premier League season but that year at Monaco was crazy.

"After Monaco lost 5-3 against Manchester City in the Champions League [last-16 first-leg match in February 2017], I did some interviews after the match, and Pep Guardiola and I crossed paths. He said congratulations on the game and that I was a very good player but it was only a quick chat.

"You could always see with the way Pep's teams played at Barcelona, Bayern Munich and now City. He was always a manager I wanted the opportunity to work with. When it came up, I could not say no.

"We had a WhatsApp group at Monaco at the time and the title was 'transfer market' for a few hours because we knew that Monaco playing in the Champions League was going to generate interest from other clubs."

'I arrived in Manchester in pink shorts'

The 25-year-old completed a transfer from Monaco to Manchester City in a £43m deal in May 2017, but he came somewhat unprepared when he arrived in Manchester two months later.

"People say the weather in Manchester is always raining but I did not believe them so I arrived in my pink swimming shorts straight from Ibiza. It was so cold in July when I arrived and I thought: 'Is it like this the whole year?' And it is.

"I'm used to it now but I come from Portugal and I lived in Monaco for three years where the weather is very good. You have a few weeks of sun in Manchester but to play football it is much better. You can run and run and you are not tired because it is not too hot.

"I was born in Lisbon city centre so I am used to traffic and noise. I'm not a country boy and I like to be in the city. If I need a restaurant, or just a loaf of bread, I can walk there and that is the way I like to live.

"People know who you are and sometimes people ask for pictures but it's fine and the people of Manchester are very respectful, so when Pep gives us a day off, I go for breakfast almost every day and I take a walk in the city centre. I like Juan Mata's restaurant and I go to Pep's restaurant, but we have to pay double!"

"When you join a club such as Manchester City, one of the biggest in the world, you know you will have heavy competition.

"If you want to be relaxed and to know you will play every game, you do not come to one of the biggest clubs in the world.

"Pep is a very intense person and he never lets you relax. His ambition to win more and more is what I have learned from him. I have had bad dressing rooms before but this Manchester City dressing room is very good."

Silva brushes off suggestions he could compete for the Ballon d'Or, but he is full of praise for teenage club-mate Phil Foden, and does not rule out a return to "his team".

Media playback is not supported on this device

'It's good if you don't put too much pressure on him'

"It's good not to put too much pressure on Phil Foden. He was born in the 2000s, and he is six years younger than me, but he is a huge talent. If he keeps working as hard as he does and his mentality is good, he will be one of the best midfielders in the world in one or two years.

"To go from the second team to the first is a huge step. Sooner or later, he will be one of the best.

"The Ballon d'Or award that nearly only two guys have won for the last 10 years - of course, I want to fight to be one of the best and I want to win the biggest trophies like the Champions League, but these kind of individual awards do not need to be thought about. If they come, fantastic - but you just have to work hard to help your team."