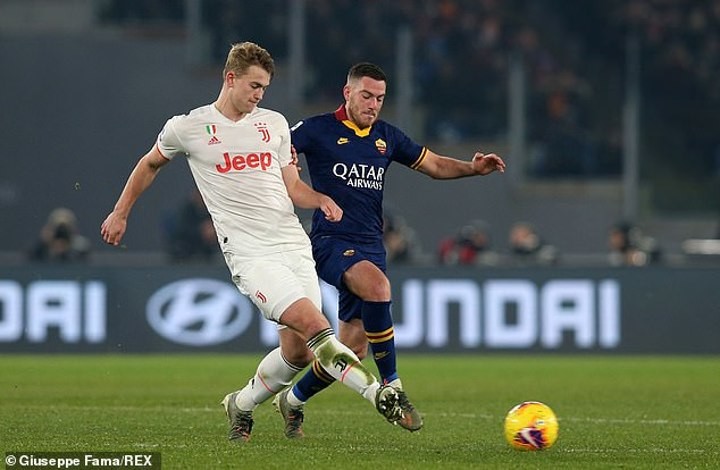 Barcelona have been forced to admit defeat in their quest to land unsettled Juventus defender Matthijs de Ligt this summer, thanks to Italy's new tax scheme.

De Ligt's  £68million move last summer saw the Italian giants cash on a new law that was passed by the Italian government at the beginning of 2019, with only 50 per cent of the Holland international's salary taxed.

However, that benefit only remains in place should the player spend a minimum of 24 months in the country, meaning any move abroad before then would see the club liable to pay backdated tax on the entirety of the 20-year-old's annual £14.5m wage for that two-year period.

As a result any transfer abroad in the case of De Ligt would be possible only starting from the month of July 2021.

The problem only arises if the player were to leave for a club beyond the Italian borders — nothing would change if the player remained in Italy.

However, it is unlikely that the likes of Napoli, Milan or Inter would be able to put together a package that would entice the defender away from Turin.

There is a release clause in De Ligt's contract, understood to be around £135m, but it will not kick in until June 2022 - three years into his five-year deal.

While it may have appeared good business sense at the time to tie down the centre back for such a prolonged period, the early stages of his Juve career suggest it may not have been the ideal move.

The former Ajax captain has struggled for game time under Maurizio Sarri and has started each of the last four matches on the bench.

Sarri has instead preferred to use Merih Demiral alongside Leonardo Bonucci at the back, although that is set to change.

Demiral was forced off during the first half of the victory over Roma on Sunday and the club confirmd on Monday that the Turkey international would be out for the season after rupturing the ACL in his left knee.

Demiral's misfortune does provide an opportunity for De Ligt to re-assert himself in Sarri's starting line-up.

It is exactly what the player needs to focus on now, with his short-term future very much decided for him.

For another 18 months at least, De Ligt will not leave Turin.