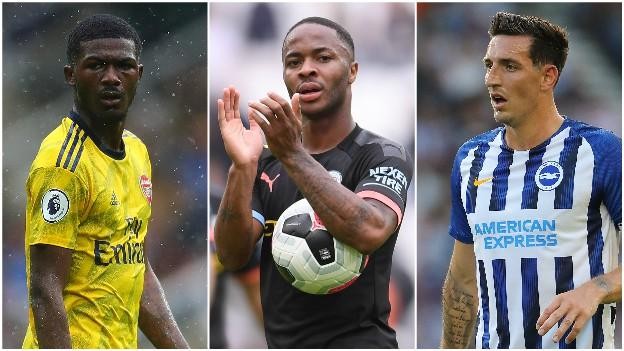 Who will you pick in your side for gameweek two?

'Why, oh why didn't I pick Raheem Sterling as my captain? What do you mean Wilfried Zaha started on the bench? How did I not see Brighton's performance against Watford coming?'

We've only had one game week but already fantasy football managers are engaging in some high-level frustration and self-recrimination.

However, before you take the nuclear option of an early wildcard, allow us to present some smaller-scale alterations that could get your team back on track for game week two.

Corporal Jones, from Dad's Army, may not have made the best fantasy football manager

OK, so your decision to bank on Bernardo Silva and Sadio Mane backfired, Jan Vertonghen was a no-show and Nicolas Pepe and Moise Kean didn't get a half of football between them.

But that's no reason to rip up all your plans and start again. One game week is no adequate sample on which to judge players, especially the first, when teams are still bedding in and so many late transfer-window signings are not yet up to speed.

Faith in Pepe, Kean and Christian Pulisic is likely to be rewarded with points in the long term if their record at previous clubs is anything to go by (Pepe scored 11 in 22 Ligue 1 games, Kean got six in 13 in Serie A and Pulisic four goals and four assists in 20 Bundesliga matches).

As is loyalty to Zaha, who was named on the bench for Palace's opener against Everton after his club refused to sanction a move to Goodison Park, but showed enough in a 25-minute cameo (eight touches in the Toffees box) to illustrate how much the Eagles need him.

He is also particularly prolific on the road, having scored six goals in his past seven away Premier League games. He and his side are at newly-promoted Sheffield United on Sunday.

The cost of Sterling

Sterling's opening weekend hat-trick at West Ham - followed by the assertion from Pep Guardiola that the forward has reached a new level of clinical finishing and consistency - is the surest sign yet that not having him is an act of self-harm against your fantasy side.

It's not as if the signs weren't there - Sterling's start, while particularly explosive, is in line with the kind of form that has seen him accrue 229 and 234 points respectively in the past two Fantasy Premier League seasons.

He was involved in 29 goals last season (17 goals, 12 assists) and started a healthy 31 of Manchester City's 38 Premier League games.

The issue with getting him in now is his price, which has already risen by a crucial £0.1m on FPL, making a like-for-like single transfer tougher, unless you have cash in reserve or are willing to transfer out Mohamed Salah (probably a bad idea).

The other option is to cash in four points to make an extra trade, which might well be worth it when you consider that Sterling has been directly involved in six goals in his past six Man City games in all competitions against Saturday's opponents Tottenham (five goals, one assist). He has scored four in his past three matches against them at Etihad Stadium.

Take a punt on the new boys?

It is so very easy to get seduced by the tantalising unknown prospect of an expensive foreign signing, but don't let big money pull the wool over your eyes, especially in a market as inflated as this.

Ismaila Sarr may have arrived at Watford for a record fee, but how much do you actually know about him? Giovani lo Celso sounds good, but is he likely to hit the ground running?

Allow us to at least give you an indication as to the pedigree of some of the most prominent deadline day signings...

Arsenal's dogged pursuit of left-back Kieran Tierney suggests his time will come sooner rather than later, meaning the Gunners will have two potentially points-rich options at full-back, along with Ainsley Maitland-Niles on the right.

Watford's horrific start to the season could see Sarr installed in the team sooner rather than later, while you would expect Lo Celso - arguably the pick of the above bunch for potential fantasy football returns - to have to earn his place in the Spurs side from the bench.

In with the Seagulls?

Graham Potter's bow as Brighton boss was arguably the most surprising aspect of week one, with Albion outplaying Watford en route to a 3-0 victory.

But again, we'd urge caution before deciding the Seagulls are the solution to all your problems, in the same way that it is probably a tad early to ditch Andy Robertson and bring in Erik Pieters on the strength of the latter's two assists on Saturday.

Remember that two of Albion's goalscorers were substitutes (Florin Andone and Neal Maupay), who have a good chance of again starting on the bench with Potter perhaps loath to alter anything.

With Potter using a 3-4-3 formation in the opener and preferring his side to play out from the back, week one assist-making centre-back Lewis Dunk is a possible option, as is wing-back Martin Montoya (the man on the other side, Solly March, is largely listed as a midfielder, thus denying him significant clean-sheet points).

You might also want to consider that striker Glenn Murray has scored six Premier League goals against West Ham (who they face on Saturday) - more than against any other club - while Pascal Gross has assisted in each of his three top-flight appearances against the Hammers.

Speaking of assists, here are the players who created the most chances in week one, interestingly topped by Chelsea pair Pedro and Mason Mount, suggesting you shouldn't be so quick to ditch Blues players after their 4-0 defeat at Manchester United.

Other things to consider...