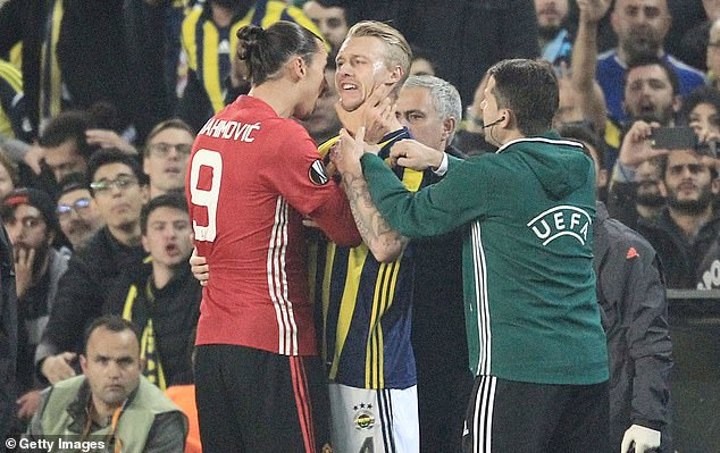 Simon Kjaer is adamant he has no lasting feud with new team-mate Zlatan Ibrahimovic, despite being grabbed by the throat by him while playing for Fenerbahce three years ago.

Once it was announced that Kjaer made the move to the San Siro on loan for Sevilla, talk of an awkward reunion with Ibrahimovic dominated.

The Swede, now 38 and back at AC Milan for his second spell at the club, grabbed Kjaer by the throat during a game for Manchester United against Fenerbahce back in 2016.

But rather than continue their war of words, having previously accused Ibrahimovic of being 'arrogant', Kjaer looked to smooth over the situation as he revealed it 'is a pleasure' to be a team-mate of the veteran forward.

'I have faced him many times during my career,' Kjaer said. 'We've had our battles on the pitch, but there are no problems between us.

'We have the same goal, to give Milan a hand and lift them as high as possible. His career speaks for itself, it's a pleasure for everyone that he's here'.

Kjaer, 30, has joined on loan until the end of the season but is looking to impress in a bid to try and secure a longer stay in Milan.

The Danish international defender started in the 3-0 win over SPAL in the Coppa Italia and will hope to retain his place for the weekend match-up against in-form Udinese.

'It has always been a dream to play for Milan,' he added. 'I am very happy to be here, it's a great club.

'You breathe the great history at Milanello. It's a pleasure to be here, I'm really happy'.

Stefano Pioli's side are currently sat 10th in Serie A and given a kind stretch of games in the next four, Kjaer and Ibrahimovic will look to together inspire an upturn in form, building on the rout against SPAL.