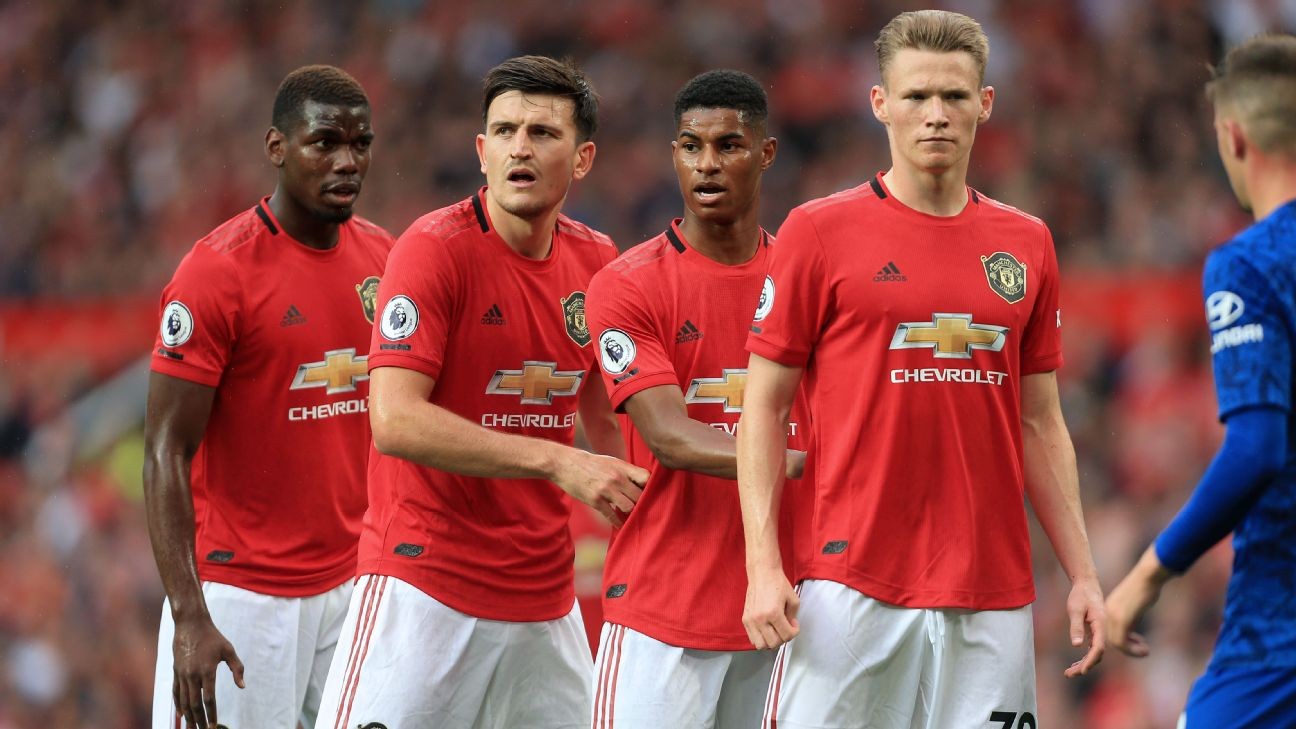 Faith begins when reason ends. You get to the outer limits of your rational tether and then you take that big leap. It's not necessarily a bad thing: Belief is central to sports. History is filled with stories of those who believed in themselves, thereby achieving great things. There's also a rich trove of "outside-the-box" thinkers who are rewarded when they defy conventional wisdom and mainstream opinion to do things differently, whether in terms of tactical innovation or recruitment approach.

Then again, relying on faith more than reason can also amount to a whole lot of smoke and mirrors. And Manchester United's summer transfer campaign requires a leap of faith, because reason and evidence won't get you far enough. Certainly not if you want to divine some kind of path forward progress in the medium term.

But first, let's deal with the aspects of United's summer that were not leaps of faith.

Aaron Wan-Bissaka may have just one Premier League season as a starter under his belt, but he showed more than enough and has shown more than enough in the past year to suggest he belongs at this level. Add the fact that he's 21, which means you'll either amortize the fee over a decade of service or, if he comes up short, still get a fair chunk of your money back thanks to the Premier League mid-tier's insatiable hunger for competent English footballers.

Extending Marcus Rashford's contract also falls into the no-brainer category. It's true that a reported £200,000 a week is a hefty pay package, but a striker of comparable quality and age (21) probably would have cost close to that in wages, plus a massive transfer fee. What's more, he's Mancunian, he's likeable, he's a good professional and he's homegrown, all of which tick marketing and "club values" boxes as well.

Harry Maguire, at £80 million, is a bit more of a stretch but still no more than a calculated risk for a club of Manchester United's financial might. There's enough of a body of work there to suggest that, at worst, he'll be an upgrade over the guys he's replacing. He turns 27 this season, so you probably won't get much resale but at best, he'll be one of the top central defenders in the league for six or so years.

Move along the reason-to-faith continuum and the needle moves a little further into the "faith" category.

Daniel James has excited many and he too seems like a thoroughly likable guy. At £15 million (plus potential bonuses), he wasn't overly expensive to poach from Swansea, either. But he turns 22 in November and made his league debut only a year ago. Compare him to another Welsh winger, Liverpool's Ben Woodburn, and you'll note that he has four international caps to Woodburn's 10. Note that Woodburn is nearly two years younger and plays his league football in League One this season.

Maybe the Welsh FA are fools. Maybe James is a late bloomer. Maybe coaches and scouts just missed out on him. Maybe United spotted something beyond his absurdly good goal that went viral last year, but there's no denying that it's rare for players at that fee and with that résumé to have a lasting impact at Old Trafford. Again, it takes a leap of faith, in both James and United's scouting, that he won't turn into the Welsh David Bellion.

David De Gea's new contract -- agreed to but apparently not yet signed -- is a leap of faith either way. If the club signs off on paying him £110 million over the next six years, the leap of faith is that they believe the real De Gea is the one from two years ago, not the one from last season (who was humdrum, by his standards). Any way you slice it, that's an enormous wage, particularly since it's not as if Europe's other big boys were beating a path to his door: most are already well-served between the sticks.

(Of course, if there's a more sinister reason why he has reportedly yet to sign, like holding out for even more money or running down his contract, then that's even more worrying, though truth be told, the mishandling of De Gea's deal in letting it go this far predates the summer.)

Paul Pogba, left, and Harry Maguire, second from left, will help anchor this Man United side moving forward but the summer transfer window was largely frustrating for the club.

Cycle backwards and there was the appointment of the manager.

As an interim boss to muck out Jose Mourinho's mess, Ole Gunnar Solskjaer was just fine. But giving him a permanent deal (three years, no less) in April when they could have spent another two months evaluating him (and deciding if there were better options out there) was another massive leap of faith.

How about the striking department and the decision to let Romelu Lukaku go without replacing him, and to do it at the very end of the English transfer window? United have five forwards on their books, which sounds ample until you remember that one of them (Rashford) has never started more than 36 games in all competitions or scored more than 13 goals. Another (Anthony Martial) does double duty as a winger and has started fewer than half of United's league games over the past three seasons. Then there's Alexis Sanchez, who is coming off a Copa America, scored only twice in all competitions last year and has generally been a bust since moving to Old Trafford.

United's other two forward options, Tahith Chong and Mason Greenwood, are 19 and 17 respectively and had eight appearances, one start and no goals between them heading into this season.

(Greenwood, especially, is a highly rated prospect but he turns only 18 this season. Reason and history suggests 18-year-olds don't generally contribute greatly even when we're talking GOAT candidates. Lionel Messi had 25 appearances and eight goals the year he turned 18. Cristiano Ronaldo clocked in at 31 and five. Sure, there are players who blossomed at a tender age -- Michael Owen, Kylian Mbappe, Neymar -- but they're the exception. Are you sure you want to take that leap of faith with Greenwood?

Maybe the biggest leap of faith of all is in midfield.

Compared to a year ago, United lost Marouane Fellaini and Ander Herrera this summer and neither was replaced. Instead, your leap of faith is that Scott McTominay -- who is 22 and started only nine league games last season on a pretty average team by United standards -- will blossom or, if that doesn't happen, that 31-year-old Nemanja Matic, whose output declined sharply last season, will turn back the clock. Or that Fred, who struggled in his first season at Old Trafford and started only 10 of 29 games with Solskjaer in charge, will go back to being the player he was in Ukraine. Or that Andreas Pereira, now in his sixth season at the club (he has seven league starts to show for it) will suddenly, at 23, go to the next level.

- Ames: Man United the big losers in transfer window?
- Borden: Christian Pulisic is not your wonderboy anymore
- 30 Under 21: The best young players in men's soccer

(You'll note at this point that I haven't mentioned the club's most expensive player, one Paul Pogba. I have faith, as does the club, that he won't leave between now and the end of the Spanish transfer window and that he'll have a strong, productive season. Many do not.)

There's nothing wrong with faith. It comes down to trust. The people making the decisions at the club, from Ed Woodward to Solskjaer to assistant coach Mike Phelan, to the gaggle of scouts and coaches on the payroll, see these guys every day and do this job for a living. If you trust them enough to take that leap of faith, then great. Maybe they'll be vindicated.

But when it comes to reason, that's another matter. Reason, when you have the sort of resources United have, would have suggested a different path, one with fewer leaps of faith and a couple more reasonable certainties. Provided, of course, the conspiracy theories being peddled in the darkest corners of the internet aren't true and Man United's goal is to genuinely restore the club to a status befitting its history and achievements over most of the past three decades and not simply to milk it further commercially while making the balance sheet look better in case a prospective buyer turns up.

Either way, it could be a long season at Old Trafford.